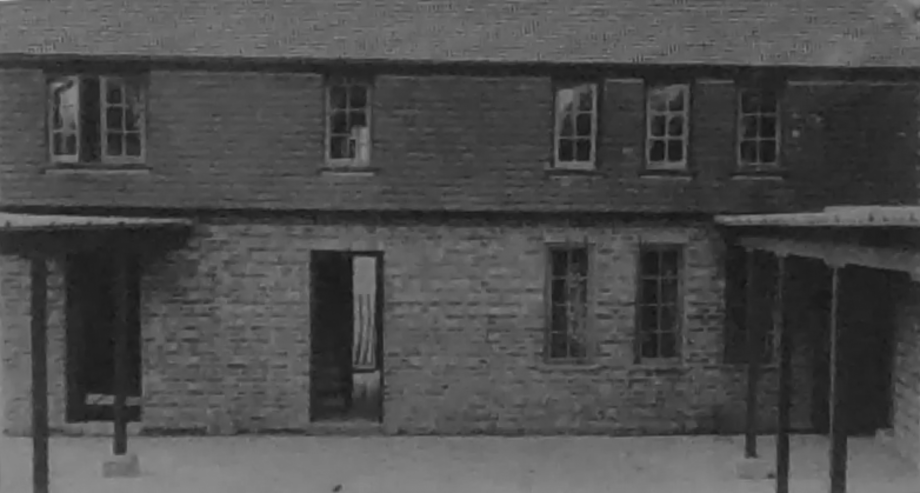 The Kent and Sussex Courier dated 4th June 1910 reported "the premises have been acquired by Richard Wilson, Vicar of St Augustine's Stepney, for the purpose of a temporary hospital for the benefit of hoppers during the picking season. The premises had been put in to thorough repair. A new ward had been built and other improvements made. During the hopping season trained nurses will be in residence day and night." 'Pull no more Poles' was published by JGW Farley in 1962 to tell the story of the Hopping Missions. He was involved from 1906 and eventually became chairman of The Red House. The book is no longer in print but there is a photocopy at Hoppers and another can be lend to serious students.

The construction of the front courtyard as a war memorial came about because Charles Saunders, who was killed in WW I left money to the Mission. The building, opened in September 1925, was designed by an Architect Mr Hake "the whole courtyard was paved with bricks and a loggia built on three of its sides, including an entrance from the road. The roofs were tiled to match that of the old building. The brick pillars were painted white. Its arcades had a severely practical purpose of affording shelter in bad weather. In one of these was an open fireplace so comforting on cold winter evenings." [PNMP page 48]

A pair of tiny shoes were found hidden in the courtyard chimney were discovered in 2010 when thieves stole lead from the roof. The shoes are displayed in a picture frame in the main lounge of Hoppers.

Although we don’t know the exact date of these shoes, the custom itself dates from medieval times. They would have been hidden by the builders of the chimney (built 1922); the 'caches' as they were called were a common hidden item put there by a previous occupant to bring good luck and fertility to the home. Little known about the widely practiced folk custom, except that chimneys and fireplaces were probably chosen as hiding places because they served as the main focal point in most homes. Shoes were also hidden under floorboards, around doorways and below staircases, where it was considered that evil spirits and witches would enter and the shoes would then trap or corner any potential evil.

Why shoes? They are known to be symbols of authority, as in the Old Testament. (Psalm 108:9) They are linked with fertility: we still tie them on the back of wedding cars, and they are generally associated with good luck (consider all the holiday souvenirs in the shape of shoes).  But most of all they stand in for the person: it has been a common practice from at least the sixteenth century to at least 1966 to throw an old shoe after people ‘for luck’!

There had been a stand-alone cottage in the front courtyard which is shown in the 1876 plan.

It is not known when this was demolished. If it's chimney was somehow incorporated into the 1925 loggia then the shoes could be much older.

A Memorial building was added after the death of Richard Wilson in 1927 to give extra accommodation. The hospital ward was rebuilt at that time; the old photo below shows it equipped for children.