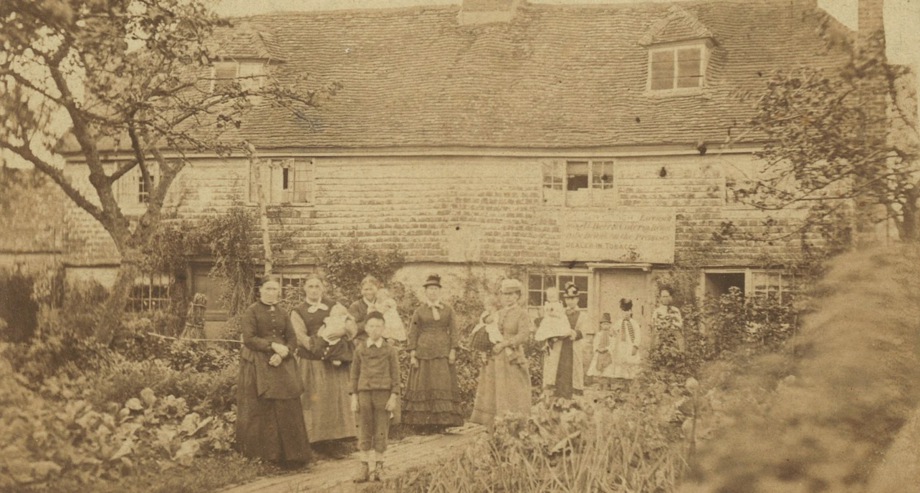 The Beer Act of 1830 made provision for licenses to be obtained for 2 guineas, John Bowles acquired the premises in 1855 to start the beer House. He raised a mortgage from John Waite in 1858 to finance the extensive works that were undertaken. A survey for The Listed Buildings in 1990, quoted above, suggests that the end chimney stacks were added in the 19th Century. A look at the brickwork confirms this. The rear extension, under the 'catslip' roof is of the same brickwork and was used as the bowling alley. John Bowles Senior, described as a builder and carpenter, bought the premises from Edward Monkton in 1822 for £200, of which £100 was a loan from John Monkton. This, we must assume, was the point at which Hoppers became a beer house.

John Bowles died in 1824 and was buried in Capel churchyard. He left the property to his wife for life (she died 1853 and was also buried in Capel churchyard) and then their 8 children in equal shares. John Bowles junior bought out his siblings and their children in 1855 and under him there seems to have been a period of expansion. He is described as a carpenter and innkeeper and borrowed £250 from John White in 1858, which he repaid in 1861.
He borrowed again in 1869 £240 from Eliza Skinner, which was repaid in 1876 when he sold the premises to Edward and Henry Kelsey in 1876 for £605. This was the first deed that had a site plan. It shows the extent of the beer house. The picture above is dated in the 1870's it shows the licencee Willian Clinch, born 1836, and his family, whose names were recorded in the 1881 census. The location of his grave in Capel churchyard is known. This copy of the photo was sent to the trustees in 2014 by a descendant.

1878 was the peak year for Hops when 71,789 acres were in cultivation and Capel was the centre of the Kent hop industry. The Kelsey's partnership had started in 1855. They owned the Culverden Brewery in Tunbridge Wells, and spent 40 years acquiring local pubs, one of which was the Rose and Crown. By the time Henry retired in 1895 they owned over 100.

Edward Kelsey died in 1903 leaving the brewery to his son Arthur, who ran it until taken over by Flowers in 1948. Edward left the Rose and Crown to his sons and Adelaide Tolhurst wife of William Tolhurst of Moat farm. The sons sold out to Adelaide who, after the pub was closed at Christmas 1909 under the Licensing Compensation Act, leased the premises for a year and then sold it to Richard Wilson. He was lovingly referred to by his family as Uncle Dick; the people of Stepney called him Father Wilson and the press dubbed him 'The Hoppers Parson'.